Why has the ubiquitous, well-meant question about the passing of the last four and a half weeks been jabbing at me, accusing me, sewing tendrils of guilt around me? Is it the lack of the big 2 week static caravan holiday this year, friends' facebook posts highlighting what we're missing? Or even the relatively few 'outings' I've taken the 4 of them on compared to other summers? We've hardly even explored the locality as I'd envisaged. We haven't baked each week, crafted every day, played hours of board games. We've pottered around. But it can't be enough surely? I'm not giving them enough, taking them out enough, challenging them enough. I am not enough. There. That's it, isn't it? I don't measure up to the expectation. My expectation. Their expectations from previous summers. Everyone else's expectations. But daily I have prayed that God would redeem the time, that we'd do the things he wanted us to do, see the people he wanted us to see. I have struggled with not having A Plan, not realising that I don't necessarily have to. Most mornings haven't been rushed. The big 2 have got up when they wanted, having slept enough to be a bit more civil. They've often read their library books for hours before thundering down the stairs for breakfast. And that's OK. Actually, they haven't been that bored, and if they have, they've found a way to entertain themselves eventually. The truth is, I am not enough. I could have devised a jam-packed summer schedule that left us all still longing for more, because it wasn't right. Instead, this summer, we have rested, recharged, reinforced relationships that were, shall we say, strained. And I am continuing to learn that my God, El Shaddai, is The God Who is Enough. And you know what? The holiday calendar the girls created doesn't look that empty after all. 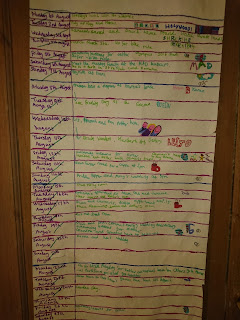